Snapchat, I Mean Facebook Stories Coming to A Newsfeed Near You on seowebfirst ‐ January 25, 2017

It looks like it wasn’t enough that Instagram copied Snapchat with Feature “Stories” (short video clips or photos generated by the user that only stick around for 24 hours, then disappears), Facebook had to hop on board too! Facebook is now “testing” its own version of Snapchat Stories at the top of their Newsfeed. “Facebook Stories” has launched only in Ireland on iOS and Android as of today. The plan is to bring it to more countries in the coming months.

Side Note*** Rumor has it that they are testing out a few other Snapchat-like features in Ireland as well.

We’re hoping to bring Stories to the rest of the world in the coming months,

~ according to a spokespersons. 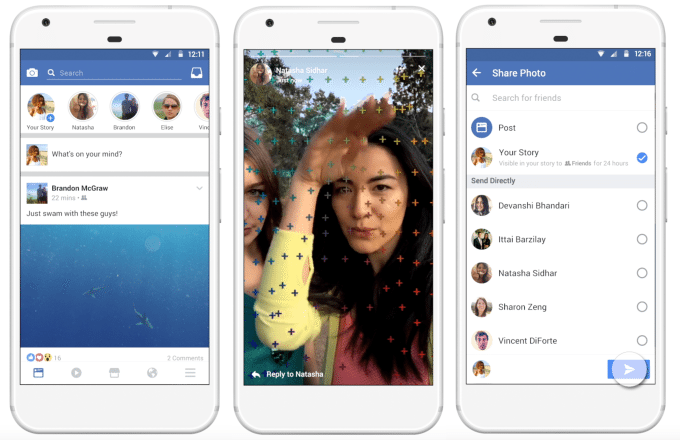 Looks like the success that Instagram had with Stories was too much for Facebook to ignore. Instagram claims that 150 million people use Stories every day. That is the same size as Snapchat’s entire user base.

Instagram product boss, Kevin Reil, has said that Facebook Stories is a format he thinks a lot of people will begin to use and compared it to Hashtags. They had originally started out on Twitter and have now become widespread online. Weil admitted in late December that they built off of Snapchats invention:

[We] built on a format that Snapchat invented. We believe that format will be universal.

Facebook Stories is another indication that the CEO of Facebook, Mark Zuckerberg, is worried about Snapchats popularity. Especially after the report from The Information from April 2016, that found that “original sharing” on Facebook went down in 2015. The same thing was happening to Instagram and apparently “Stories” being added to the platform helped fix that problem.

Facebook has long been the place to share with friends and family, but the way that people share is changing in significant ways. The way people share today is different to five or even two years ago — it’s much more visual, with more photos and videos than ever before. We want to make it fast and fun for people to share creative and expressive photos and videos with whoever they want, whenever they want.

This isn’t the first time Facebook has tried to copy Snapchat, but it has usually been in a separate app like Slingshot and Poke. Or a revamped camera buried in the News Feed. Now with this feature being top and center of the feed, it will be impossible for users to ignore and just like they did with Instagram, they will adapt and use this feature to show off to their friends on Facebook as well.

Snapchat really should’ve looked into patenting Stories, before letting Zuckerberg at it for two of his social platforms. I am sure that the CEO of Snap (Snapchats parent company), Evan Spiegel isn’t too happy about this. Especially since he is looking into taking the company public and the user growth expectations will definitely be a metric that the investors will be looking at. To have two HUGE social networks like Facebook (1.2 Billion users) and Instagram (300 million users daily) copying their best features every chance they get has to be unsettling.

How do you feel about this new clone of Snapchat? Will you use Facebook Stories? Are you going to add it to your Facebook Marketing Strategy? Leave a comment below and let us know your thoughts.